Here's a Meta Model analysis of the phrase 'limiting belief', showing why you have none...

I often read comments and posts and blogs from people on the subject of limiting beliefs, and in particular, how you can overcome your own.

Nonsense, I'm afraid. You don't have any limiting beliefs.

This topic is very popular amongst coaches and NLP Practitioners, so I'm going to turn to NLP's Meta Model of language to show you why you don't have any limiting beliefs: 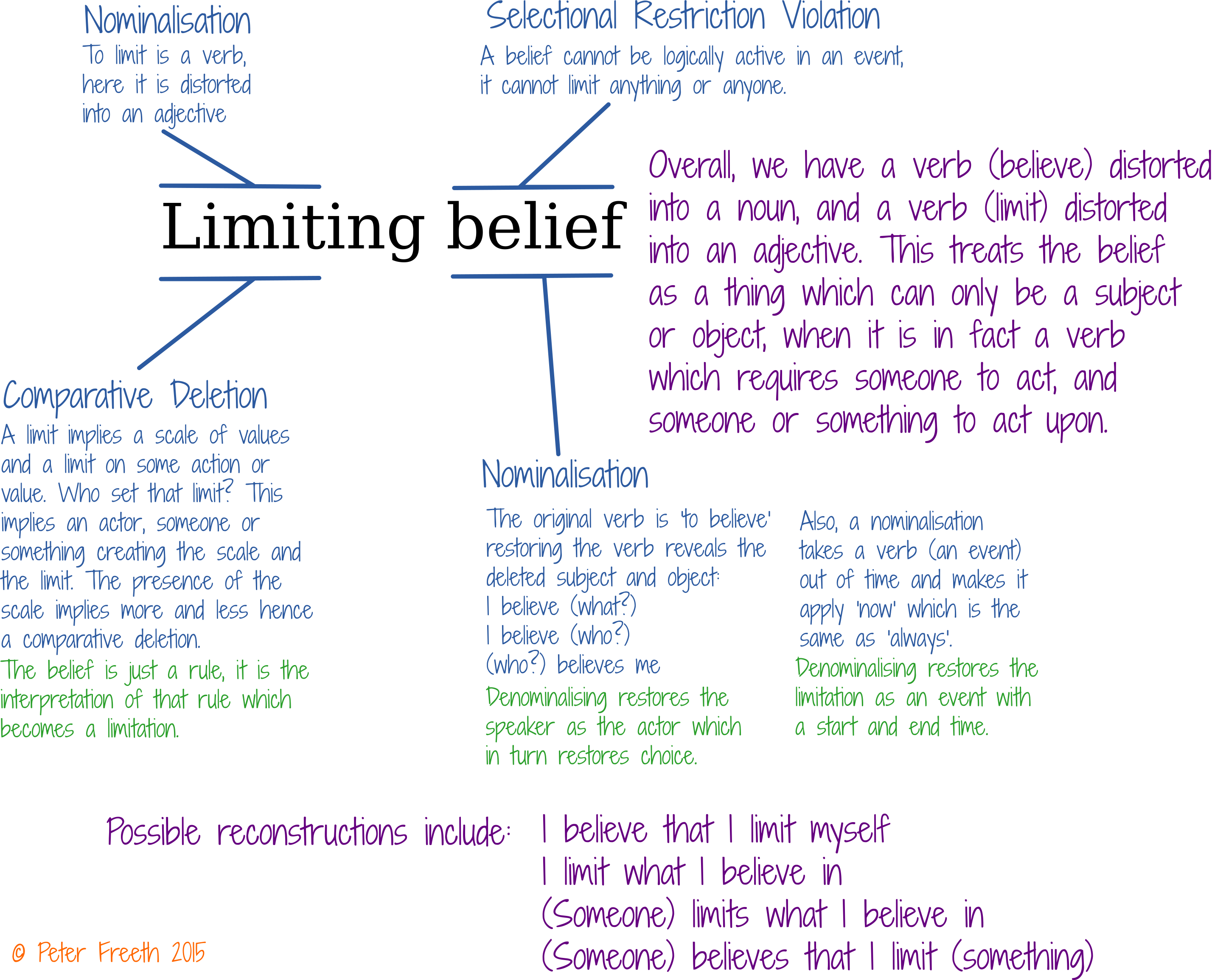 Does that all make sense?

Don't worry if it doesn't, it's quite technical. Here are the highlights.

It's impossible for you to have limiting beliefs because logically, a belief cannot do anything. Can a belief run? Can it play the piano? Of course not, only a person or animal, a living entity, can do such things. Only a living creature can act, and if we talk just about people, then only a person can believe. A chair can not believe.

What about 'limiting'? A limit is a point on a scale, so for there to be a limit, or for a person to limit something, it must be possible to have more and less of that thing. For you to limit your spending, it must be possible for you to spend more or less. The word 'limit' therefore implies a hidden scale, where both more and less of something is possible for you.

The phrase 'limiting belief' takes two verbs and freezes them in time, turning them into nouns, and that is called a nominalisation. Here are some examples, form a mental picture for each one:

Now let's turn those back into verbs and see what happens - form a mental picture for each one:

What was the difference between the two sets of mental images? Do it again if you need to - I'm guessing that the first set of images were still and the second set were moving.

At a superficial level, the few NLP Practitioners who properly understand the Meta Model will say that this freezes the action in time, and makes it 'stuck' and difficult to change. However, something far more important is happening.

Every language spoken by every person on this planet conforms to one of two basic structures:

Subject Verb Object (The cat sat on the mat)

Subject Object Verb (The cat on the mat sat)

When we turn a verb (to believe) into a noun (a belief) it moves from the Verb position to either the Subject or Object position, which is logically incorrect. However, humans are adept at twisting logic to fit the story.

When the nominalisation 'belief' becomes active, the person, the speaker, becomes passive and gives up control and responsibility for their actions.

I said that freezing the verb in time is a superficial interpretation, so here is a more profound one. By taking the verb, the action, out of time and turning it into a thing, it loses its action, its event because it is taken out of time. Instead of starting and ending, the belief applies now, which also means forever, because it's always now. So by nominalising a verb, I don't just make it apply now, I make it apply forever, and that's what makes it stuck, because a chair will always be a chair (until someone acts upon it with an axe) and a belief will always be a belief.

To believe something is temporary. It has a start and an end. You can think of your beliefs, when you learned them and you can imagine changing them.

Why, then, do you have no limiting beliefs?

What you believe does not limit you.

You choose, freely and responsibly, to limit what you believe, or to believe that you can limit yourself. And as soon as you realise that it's you doing the believing and you doing the limiting, then no belief can ever hold power over you again.