There's a lot of confusion in the NLP Training world about the connection between TOTE and Strategies, so I'm going to clear that up with an explanation of the underlying neural processes. But first, a trip back in time to 1835.

Right now, you are reading this on some kind of computing device; maybe a computer, tablet or smart phone. That computing device is essentially a set of input sensors, a network of decision making components and an array of output mechanisms, including the screen and speakers. In that regard, the computer is, functionally, like a brain. If we look at the smallest building blocks of the brain, neurons, we see that they are in fact 'wired up' exactly like the logic circuits in your computer, or your wristwatch, or your microwave oven. Some switch others on, and some switch others off, and as a collective unit, they are able to process complex and sometimes conflicting information and produce a motor output.

The logic circuits in your computer are built out of components called transistors, and transistors are in turn a 'solid state' or electronic version of a device that was invented in 1835 by Joseph Henry, a famous American inventor and researcher of electricity and magnetism. That device was the electromagnetic relay: 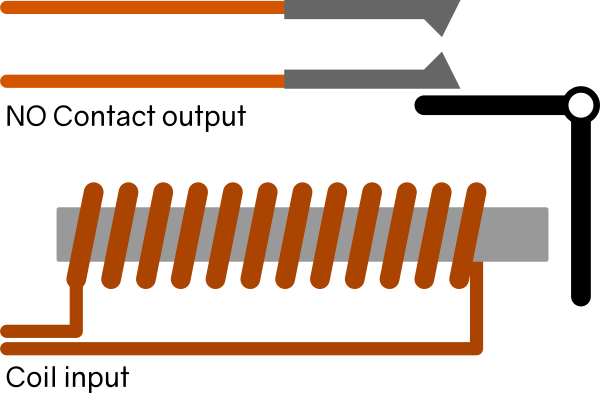 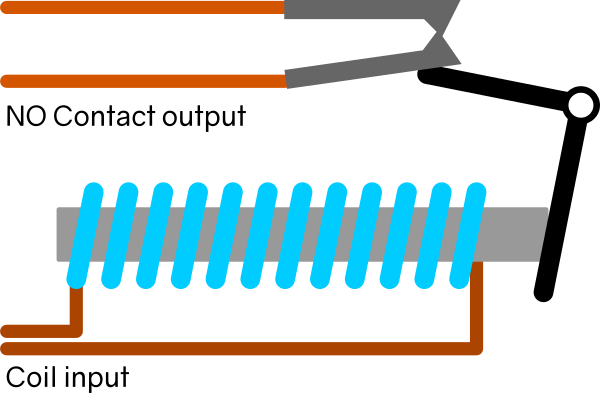 Why would you do this? Well, for example, if you wanted to use a low voltage switch to turn on a high voltage device then you would use a relay to protect the user from potential exposure to dangerous voltages. In your car, you might be able to hear the relay 'click' on when you activate your bright main beam headlights, or when the windscreen wiper motors activate. 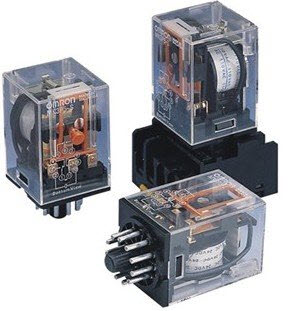 Also, if you wanted a simple switch to turn on many different types of device, perhaps in a sequence of some kind, you would use a series of relays. Up until the 1990s, many telephone exchanges still used relays to connect calls. When you dialled a '3'. a relay would click 3 times and move a complex relay called a 'selector', and your dialled number would be physically connected as a series of electrical connections through the network.

The contacts on the relay can be known as 'NO' (Normally Open) or 'NC' (Normally Closed), meaning that when the relay is at rest, its contacts are either blocking the output (NO) or they are allowing electrical current to flow in the output (NC). They achieve this through very simple mechanical means, namely which contact is pushed by the magnet when the coil is activated. 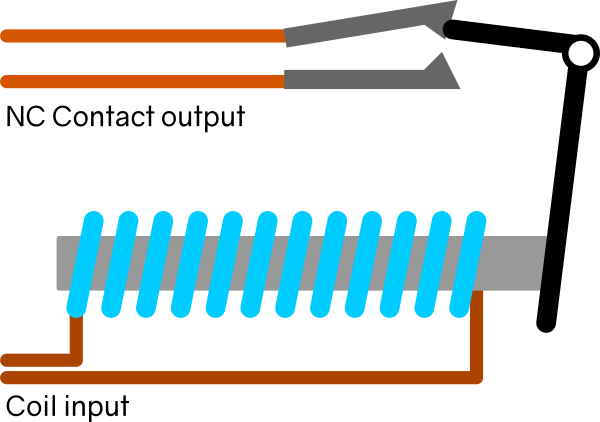 If you want to experiment with this for yourself, get a battery, a steel nail or similar, and a length of thin wire. Coil the wire around the nail, always going in the same direction. When you attach the ends of the wire to the + and - contacts on the battery, you'll be able to pick up steel objects with your 'electromagnet'.

A relay, by itself, is a beautifully simple, neat, reliable, clever little device. It essentially uses magnetism and mechanical movement to bridge the gap between two electrical circuits, much in the way that your nerve synapses use chemical energy to connect electrical circuits together. However, when we start connecting relays together, that's when things get clever.

If we connect a relay to itself, so that when it is activated, its own contacts send electrical current to its own coil, it will remain activated forever, until we turn off the supply of electricity. That means that with a simple push button switch, we could have an electrical circuit stay active. For example, you could push a button, anywhere in your house, and turn on the heating or an outside light. This arrangement is known as a self-holding relay, or a relay that is holding itself on its own contacts. But how do we turn it off? We would have to have another switch that interrupts the relay's coil connection. We could use another relay for that. So we can connect up a NO and a NC relay in such a way that a press of a button turns the circuit on, and another press of the same button turns it off. Neat!

The very first computers were built entirely out of relays. They could do everything that your modern computer can do, they just did it a lot more slowly, with more noise and heat, and they took up a lot more space.

If we move forwards to 1947 and the invention of the transistor, we can replace the relay with a smaller, more reliable, more energy efficient alternative, but the result is the same. Transistors come in two flavours, NPN or PNP (P = Positive, N = Negative), and if we connect them in the same way as our NO and NC relays, we get a circuit that keeps itself in the 'on' position, where it continues to operate a light or a motor or some other useful device.

This type of configuration is used extensively in basic logic circuits so that an output is maintained, even when the input is long gone. Such a logic circuit is known as a 'SR flip flop', where SR stands for Set Reset. Coincidentally, SR also stands, in the world of behavioural psychology, for Stimulus Response, which is what Pavlov's dogs did in 1902, and is also what Pavlov did, and is also what you're doing right now.

Behavioural psychologists of the 1900s didn't like the idea that human beings are as driven by base instincts as dogs, so they wanted to come up with a more complicated explanation, and coined the term TOTE, standing for Test Operate Test Exit. In our relay-operated outdoor light example, the first time you press the button is the first Test, the light coming on is the Operate, the second time you press the button is the second Test, and the light going off is the Exit.

Can you think of any bodily functions which work in the same way?

Basically, any behavioural response which doesn't have a middle is a TOTE.

Swallowing is a nice example. It uses a phenomenon called peristalsis to move food from your mouth to your stomach, and you can try another experiment now. Swallow half way. Or try to stop a swallow half way through. I think you'll find that once the swallow reflex hits the back of your throat, it's unstoppable.

Your throat, and in fact your entire digestive tract, is lined with circular muscles, and each squeezes in sequence to move food from one end to the other. We could reproduce this with electrical motors and relays, and the time delay between each squeeze could be altered simply by putting devices called capacitors in between the relays. Capacitors are like little batteries which take time to charge up. When they're charged, they allow electrical current to pass on to the next relay. If we add in a variable resistor, we can even adjust the time between muscle contractions. A capacitor and resistor together are the basis for the timing circuits in every computer or electronic device, and they even provide the timing necessary for your car radio to tune to a particular station.

This same arrangement of neurons and muscles enables you to eat, fish to swim, snails to slide and snakes to slither.

When you tried the swallowing experiment, you set a TOTE in motion.

Over the years, I've heard NLP trainers describe TOTE in some fairly unusual ways. The most common explanation is that, for example, a TOTE could be a decision making process such as choosing from a menu. That's not a TOTE because you can easily stop half way through. In fact, there's no need to describe this as a TOTE, because we already have a NLP word for it - a Strategy. It would perhaps be more accurate to use an example of clicking or tapping on the link to bring you to this article. You made a decision and set a motor output in action which stopped when you heard or felt feedback. You didn't carry on pushing on the screen or holding the mouse button down. The decision to stop was probably not based on one single piece of feedback, but on a combination of auditory and tactile information which signalled that you had completed the desired actions.

Product designers call this a 'signifier', meaning a piece of sensory feedback that lets you know both what to do and when you've done it. A sign on a door that says "Push" is a signifier. The fact that the door opens is called an 'affordance' - some useful function provided to the user. The words 'Click here', or underlined text signify an action, namely that if you click or tap, your browser will take you to a new page. These days, link signifiers are much more subtle, because we are far more familiar with how a website works than we were 20 years ago. However, we need feedback to know that we have correctly performed the action, so the link might flash in a different colour, or we might hear a 'click' sound, or feel the screen, or even feel the 'haptic feedback' from a smartphone, a little buzz of its internal motor which gives us a feeling that an action has taken place. Any or all of these feedback events might coincide, so we need to make sense of them as one piece of information.

Therefore, TOTE is not quite so simple, because multiple Tests would require an action to be performed or concluded. If someone wants to attract your attention, they can do it in any number of ways, and your response will be the same, the so-called 'orienting response' where you turn your attention towards the person in question. Once you've identified where the request was coming from, which again might happen in any number of ways, the orienting response stops - the second Test. However, if you are unable to identify the source, or you realise the person was actually calling someone else, your attention will go back to whatever you were doing before, so now we have another feature to add to our TOTE - the concept of a timer, and an exception. In other words, if the TOTE cannot complete, we don't wait forever, after some short period of time, and perhaps a moment of confusion, our attention goes elsewhere. When we start assembling TOTEs inside Strategies, together with exceptions and exception timers, we can begin to build an understanding of human behaviour as a series of 'Programs', and that's what I focus on in Master Practitioner training.

In summary, a Stimulus Response circuit is a simple motor output resulting from a sensory input. TOTE adds the concept that the motor output can sustain itself even when the input has stopped, for example, you can carry on swallowing after the reflex was first triggered. A Strategy is a highly complex network of TOTEs which results in adaptable behavioural responses to an unpredictable environment. A Program is a highly complex network of Strategies which achieve long term goals and maintain individual direction, which may or may not be aligned with the current environment.

I hope that's cleared that up.